A Quebecer born January 6, 1916 in East Broughton, Beauce County and christened Henri. His father was a modest shoemaker who, to provide for his eleven children (nine boys and two girls), kept a small shoe store adjacent to his shop and home, a few steps away from an asbestos mine that employed most of the local manpower. 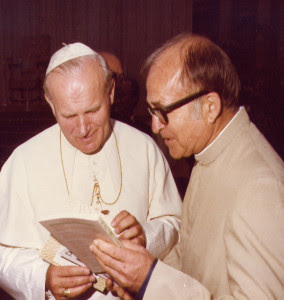 Young Henri attended elementary school in his village while some of his elder brothers had already started their secondary studies away from home. There were little chances that Henri would be able to pursue his studies since his family was financially unable to provide for them.

It was a stroke of luck that Canon Bernier, founder of Canada’s first late vocation seminary, that of St-Victor-de-Beauce, happened to come to East Broughton on a recruiting mission. Divine influence undoubtedly helping, Canon Bernier did not hesitate to take to his late vocation seminary the fourteen year old youngster whose qualities largely made up for his youth and lack of financial resources.

Following six years of study at St-Victor, he entered the Foreign Missionaries’ novitiate in Pont-Viau where he remained but one year because although the missionary’s purpose was truly his, the spirit he was seeking was that of St. Francis of Assisi. So, he went knocking at the Franciscans’ door and was immediately welcomed in. There, he was given his patron saint’s name of Eusebe. He completed his theology studies and was ordained priest in the Fall 1941. He went on to further studies in sociology at the University of Montreal until 1943.

His oratorical talent prompted his superior to appoint him preacher at the Franciscans’ retreat house in Châteauguay, near Montreal where, during three years, he distinguished himself not only by his eloquence but also by the evangelic message he was passing on.

In 1945, Hector Durand, an important Montreal contractor and business man, after attending one of Father Menard’s retreat, offered him his financial support for a church organization, either already in existence or to be established. It was, for them, the beginning of an association that was to last over twenty-five years and would be difficult to match.

Their major project was the foundation of the Holy Apostles started in Canada and taken abroad later on by Father Eusebe. In 1972, Mr. Durand’s untimely death put an end to his apostolic work on earth, to which he had so generously devoted his fortune, his time and his life.

From 1962 until his death, Father Menard worked mostly in the United States and Latin America. With unfailing ardor, he continued to promote adult sacerdotal vocations and lay christian commitment.

While his Canadian foundation spread out as far as Africa, Father Menard established missions in United States, Peru, Columbia and Brazil.

A great man has left us.

Mr. Hector Durand was born April 25, 1892, in Saint-Jean-de-Matha in the county of Joliette (Canada). He went to grammar school there and began his classic studies in Joliette Seminary. Following the example of his father, a small industrialist, Mr. Durand had a stronger liking for construction than for studies.

Before deepening his aptitudes, he needed experiences, one of which was his stay in western Canada. There, he met a nurse, Miss Clara Farrell, to whom shortly thereafter, he married. They returned to Montreal with a little money saved from the west. It is then that Mr. Durand built houses.

His spirit of initiative, his talent and his untiring work, always backed by his excellent wife, that allowed Mr. Durand to become, in a time of great economic difficulties, a champion in the construction of house.

At the end of the second world war, in 1945, Mr. & Mrs. Durand had a few hundred apartment houses, besides what they had built for their brothers and sisters. However, the tough Hector Durand, carried in the deepest part of his interior life, a seed that was only waiting for the providential occasion to grow and blossom.

This opportunity took place when Mr. Durand went on a closed retreat with the Franciscans of Chatauguay. The preacher of this retreat for businessmen was a young 29 year old priest, Father Eusebe Menard. His preaching, centered on the Word of God and more specifically on the Gospel, produced a shock whose effect was felt right up to the death of Mr. Durand.

Rightly, Father Menard always repeated that he realized his work thanks to Mr. Durand, who he always referred to as Co-Founder. In spite of ups and downs, the Menard/Durand relationship produced, in 27 years, fruits that could be compared with any priestly work.

Above, we have pointed out that the Biblical preaching of Father Menard in a time when the Sacre Scriptures where far from being found in every house. We have to also underline, with no less emphasis, the originality of the priest/lay collaboration, 15 years before the 2nd Vatican Council.

The great strength of Mr. Durand was above all, his faith: his faith in the priest, his faith in the Church, his faith in Christ. Not only did he read the Imitation of Christ (the book on his night stand), he imitated Christ. For him, faith without works did not make sense. There’s where we see why he spend his entire personal fortune not only to organize the Society of the Holy Apostles, but to work unceasingly, and persevered, almost with rest, for the last 27 years of his life in order to give more priests to the Church.

The last paragraph of his Testament, written by hand, and signed November 13, 1971, is significant for breadth of his intentions, and which could very well be, for us, a great opportunity to reflect: “I am sorry for not having built more houses to form priests.”

He who has just died was a giant and those who knew him will only slowly discover the immense grace that the Lord gave them by letting them have interacted with a man such as he. His detachment and generosity could not have reached their heights without his determination and his dedication. Not only his works live on, but also, for some time now, his apostolic actions go beyond the frontiers of our country. Africans, South Americans and Asians benefit from his generosity.

May God be praised forever for having given us Mr. Durand. May He give us from on high, a bit of his charity.